The school was founded by the Sisters of Mercy in 1923 and, following the tradition of the Mercy Sisters, we recognise the importance of education as a crucial way for children to reach their potential. The first lay teacher (a teacher who is not a member of a Religious Order) began in 1966 and the first lay principal was appointed in 1986. Today the school is staffed by a strong group of dedicated teachers and school officers who continue the mission of Catholic Education begun so many years ago by the Sisters of Mercy.

Pope Francis writes in his letter about St Joseph:

With a Father’s Heart: That is how Joseph loved Jesus.

In this letter, Pope Francis describes Saint Joseph as a beloved, tender, obedient father; an accepting father; a father who is creatively courageous, a working father, and a father in the shadows.

Pope Francis also outlines how we can learn from the actions of St Joseph in our lives today.

St Joseph is the person who was closest to Jesus and Mary. Although we know very little about Joseph, when we read about him in the gospels, we hear of a man who stood strong during difficult times, a man who had the courage to become the earthly father of Jesus. 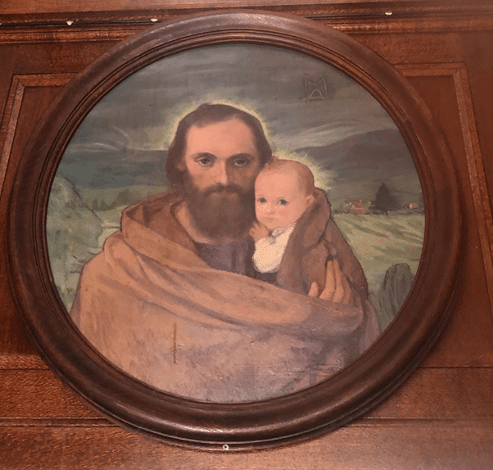 The Roman decree requiring Joseph and Mary to travel to Bethlehem would have been a traumatic journey. Jesus was born in a stable “because there was no place for them” (cf. Lk2:7). The flight into Egypt and the loss of Jesus in the Temple were further occasions of anguish. Through all these difficulties St Joseph was called by God to serve the person and mission of Jesus directly through the exercise of his fatherhood.

Joseph, Mary and Jesus lived in the remote little village of Nazareth. Jesus probably followed his father’s profession as a carpenter or tradesman. We do not know when Joseph died but when the gospels record that Jesus began his public ministry, there is no mention of Joseph.

St Joseph has always been venerated as a father by Christian people. It explains why many churches, religious orders and ecclesial groups have been inspired by his spirituality and bear his name. Joseph’s popularity owes much to the promotion by St Bernardine of Siena in the 15th Century and St Teresa of Avila in the 16th Century. In 1870 Pope Pius IX named St Joseph as patron of the church. Pope John XXIII declared Joseph the patron of the Second Vatican Council.

Artwork of Joseph has not always shown the true Joseph who was a vital young Jew with all the emotions, struggles and trials of a Jewish man living in first century Palestine.

Joseph teaches us that faith in God includes believing that he can work even through our fears, our frailties, and our weaknesses. He also teaches us that amid difficulties in life, we must never be afraid to let the Lord steer our course.